Pulmonary embolism (PE for short) is a dangerous and life-threatening 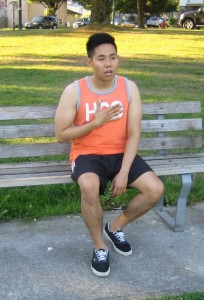 respiratory condition wherein there is an obstruction of the pulmonary artery or one of its underlying branches by a thrombus formation that originated along  the general circulation which becomes a secondary complication brought about by a primary disease condition.

Pulmonary embolism is one of the most common disorders often associated with trauma, orthopedic surgery of the hips and femur, heart failure, pregnancy, advance age, prolonged immobility. A thrombus that is formed within the general circulation can completely or partially obstruct a pulmonary artery or any of its branches hence, PE is a serious and potentially dangerous complication that warrants immediate medical attention.

Most commonly, pulmonary embolism is primarily due to a thrombus or  blood clot formed within the general circulation. However, there are certain types of emboli other than a blood clot such as air, fat, amniotic fluid and septic debris from bacterial invasion. Although most thrombi originate in the deep veins of the legs or other sites including the right atrium of the heart and the pelvic veins.  Venous thrombosis can result from the slowing down of blood due to a sluggish  flow resulting from a damage to the underlying vessels of the arterial and venous circulation and changes in the blood coagulation mechanism.

When a thrombus formation obstructs a pulmonary artery, the alveolar dead space is increased significantly which can no longer receive a better gas exchange and perfusion. Moreover, the area, although continuing to be ventilated it still would be unable to receive adequate blood flow.    In addition, the various substances are released from the clot and surrounding area that causes regional blood vessels and bronchioles to constrict.  This results in an increase in pulmonary vascular resistance and ventilation-perfusion imbalance.

thrombus and the area of the pulmonary artery occluded by the thrombus. Difficulty breathing is the most frequent symptom and a rapid heart rate is the most common sign. The duration and the intensity of the difficulty in breathing is based on the extent and significance of the emboli obstructing the pulmonary circulation. Chest pain is also common and is normally abrupt and pleuritic in nature and origin. Other symptoms include fever, anxiety, apprehension, tachycardia, cough, profuse sweating and feeling of impending doom. A massive PE is best defined as a degree of hemodynamic instability  instead of simply referring to it as the degree of vascular occlusion. Finally, an atypical pulmonary embolism causes few signs and symptoms that mimic various other cardiopulmonary disorders.

Let us know if you liked the post. That’s the only way we can improve.
Pulmonary Embolism 2013-11-16
Admin